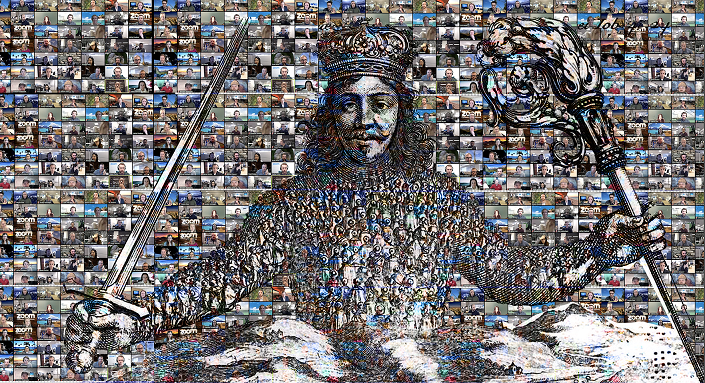 Corona put the performing arts on hold. Venues closed and switched to live streaming, cancelling the immediate connection between performer and audience. Several of CREW's projects were cancelled and so we searched for an alternative.

The futuristic production Hamlet’s Lunacy by Eric Joris and Mesut Arslan was transformed by CREW in collaboration with Monty Kultuurfaktorij into Hamlet’s Playground, a corona-proof interactive theatrical experience happening simultaneously live and online.

For this new theatre experience, CREW puts their own spin on the Gathertown platform. No more boring streaming and passive watching. As an avatar — a digital persona — the audience plays an active part. Live actors guide the audience in a console game-like environment through various rooms, where historical documents and technology provide new insight in Hamlet’s conflict. Afterwards everyone is welcome in our digital café. Hamlet’s Playground puts the viewer in a virtual, curated world. With a combination of manipulated imagery, computer graphics and live enactments, history comes to life on your computer screen.

The shift from a medieval to a pre-modern world view defines both Hamlet and his zeitgeist and for us it also contains the essence of Hamlet’s dilemma: How to act honourably (ethically) in a conflicting world? Hamlet’s playground draws parallels between Hamlet’s conflict and actual conflicts throughout the world. Whom and what are we supposed to believe in a world where lies go viral in a matter of seconds? As with Shakespeare’s Hamlet: doing nothing is also a way of assuming a position.