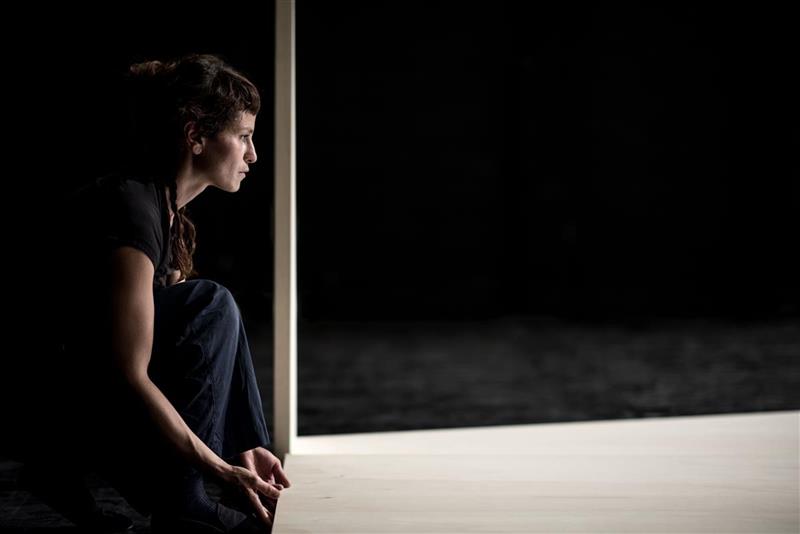 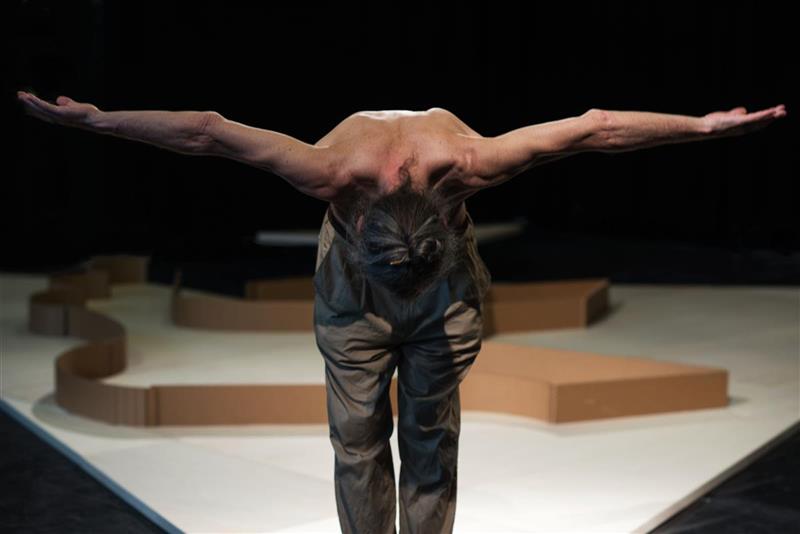 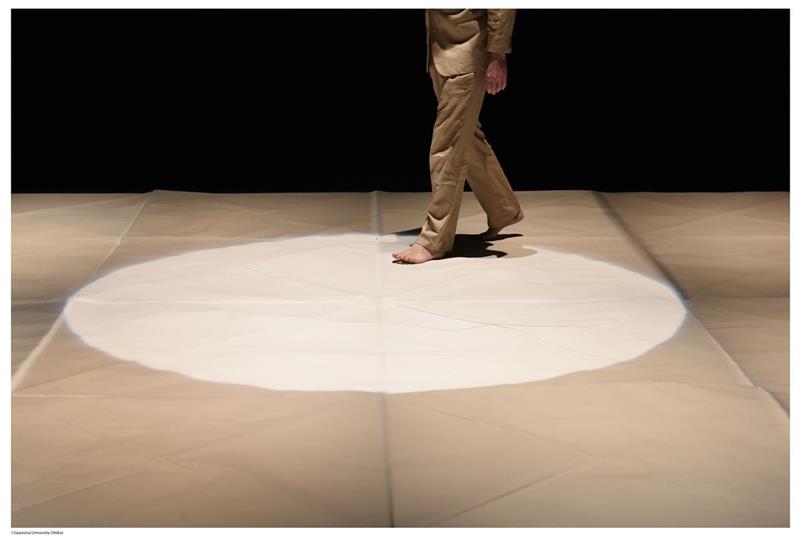 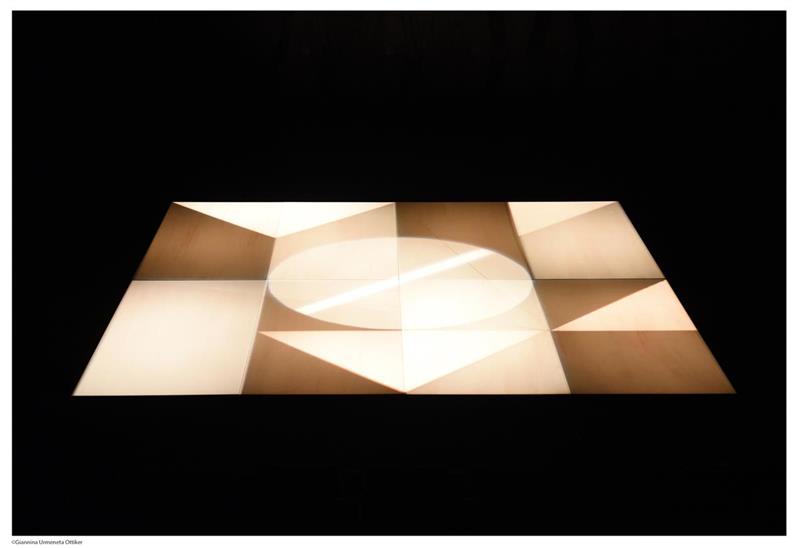 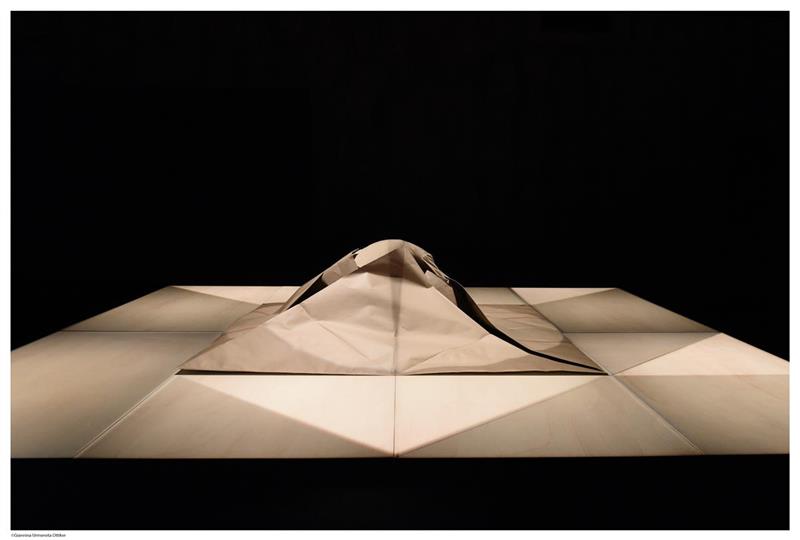 The House of Art and Beauty Kasia Torz

THREE is for me, you, them. FOUR is FOR - us. FOURfold. FOR - fold. A column, dwelling, totem, pathway. It is a gift - to pack, unpack, repack. It is a spiral cube, a volume to unfold over the foldable surface. A square surrounded by a circle - a sphere made of visible voices. Light matter.

In the work of Meryem Bayram an unfolding relation between a human behavior and a constructed spatial environment is a central driving force. With substances such as wood, cardboard and elastics, she creates installations that are tracing and reshaping outlines of a physical space and in a same gesture, are challenging living bodies to inhabit and transform that space. By proposing specific encounters between the body and material, she shapes and organizes tensions between  the visible and invisible, composed and improvised, proliferating connectionpoints while constantly reinventing new obstacles.

Just as in the previous creation - Autonomous Scenography (2014) - “Fourfold” resists to a fixed narrative or a singular conceptual frame. It is instead, first and foremost, a living encounter between Meryem and visual artist Guy Rombouts (1949, Antwerp). In this encounter her proposition of a space will be given as a gift to the body of the fellow artist . Guy`s response to it, his “unpacking¨of Meryem`s spatial gift will generate a core of the “Fourfold” event. Around the edges of it, Meryem will continue working, adding and subtracting material and immaterial elements to the unfolding space - objects, vocal interventions, light and sound cues. Those improvised yet clearly defined fragments will be introduced into the performance as a generative power through which the initial meeting between Meryem and Guy will be continuously renewed.

The light design for the “Fourfold” will be developed by visual artist Pol Matthé.

Guy Rombouts (°1949) lives and works in Antwerp. Since the early 1980s, Rombouts has blurred the existing boundaries between words and objects creating a body of work with poetic and conceptual idiosyncrasies. In the early ‘80s, he collected objects of which the names consisted of three letters, and exhibited them in alphabetical order. In 1984 with his partner Monica Droste (1958-1998), Rombouts created his well-known Azart alphabet. The line-based alphabet allows words to take on an endless array of two/three-dimensional shapes. Ever since it was first designed, it has served as a deliberately coincidental procedure for creating objects, sculptures, paintings, etc. Using the website, everyone can generate images in Azart.

Pol Matthé (°1982) is a Belgian artist who lives and works in Stockholm, Sweden. In 2005 he graduated from the Royal Academy of Fine Arts in Antwerp. Matthé develops and constructs situation-specific works, installations, performances and printed matter. By using notations, objects, documents and photography, he sweeps the sidewalks and meticulously layers, overlaps and folds out these collected archives and their encounters. In 2004 he founded Z Forlag, a small press that publishes books, multiples and editions.

Igor Dobricic (°1966) studied dramaturgy at the Academy of Dramatic Arts in Belgrade, (former) Yugoslavia and attended Master of Theatre at DasArts in Amsterdam, Netherlands.  He is working internationally as a dramaturg and artistic advisor, collaborating with a number of choreographers/artists (Nicole Beutler, Keren Levi, Guillaume Marie, Christina Ciupke, Jeremy Xido, Alma Sodeberg, Meg Stuart a/o). As a  professor and mentor he has a long term engagement with the School for New Dance (SNDO) Amsterdam Master of Choreography (AMCh) and the Amsterdam Master of Theatre (DasArts). From 2010 onwards he is also developing his own performative research project titled TableTalks. During the last 7 years TableTalks is hosted and presented in a number of radically different cultural contexts in Amsterdam, Berlin, Stockholm, Cairo, Sao Paulo and Vienna.

His long standing professional interests lie in the practice based exploration of parameters of a live event that exist in-between different fixed contexts (theatre and visual arts, professional and non professional status, individual and group work, aesthetics and ethics).